There is no relationship without fights, some are silly fights and some are serious one. What if one day you came home and had to face an silly fight on a topic you don’t even know.

So read these out carefully so not to stress out and avoid silly fights in a relationship.

How to avoid silly fights in a relationship?

If the other person is furious then at least you stay calm. As anger won’t do any good in this. Anger management is uncommon among us. There are two types of people:

First, who can’t take anything on him and get angry as fast as you trigger. They have very less control on their mind and without understanding the situation burst out.

Second, who first tries to analyse the situation and understand it before jumping into any conclusion. They understand the other person and why they are furious and try not to be like them as it would make things worse.

How to be calm?

While calming yourself, analyse the situation. Find the reason behind such a fight. No one is looking for an argument. There is always a reason behind a fight.

Evaluate situations from both perspectives. What you think right could be wrong for your partner. Moreover, it’s not about who is right or wrong? It’s about how to react to the situation and how well you manage it without being into a big argument. It’s not easy to accept your mistake, few have that courage.

3. Try to calm your partner

Calming your partner in this situation might be the most difficult task. But you have to accomplish it. Ask them to sit down and take deep breaths and be relaxed. Assure them you would answer all their questions but for that first they have to calm down.

Assure them you would be loyal and true to them. As you also don’t want this kind of fighting, which disturbs both of you.

4. Listen to your partner

It’s a hard thing to listen to a person when that person sitting in front of you is blaming you for such silly fights. But as I said it’s their anger who is speaking.

Be a smart one to listen to them first and then say in your defense. Listen to whatever they say carefully to have a good point in return. Don’t interrupt in between as that can make them angry.

5. Make them understand your point of view

Try to make them understand what you are telling. Being defensive is okay but arguing when you are wrong is not justified. It is wise to accept your mistakes when you are wrong and finish the topic sooner. What if you are right and they are not understanding your point of view. It’s the most common problem in every fight.

You can do two things :

First, stick to your words and try to prove them wrong all day and night.

Second, be the smart one and accept the mistake and let this thing go off.

Later is the most suitable option if you want peace. Let them be happy by proving you wrong and them right. When you personally know the truth, you don’t need any validation from them or from anyone else.

If they are not listening to you, then leave but don’t be furious as it would ruin your rest of the day and that too without any reason.

When a person  is angry they lose their ability to understand fast. It’s better to leave the place rather than being furious over a silly argument.

A Big NO. Just leave if you feel like things slipping away from your hands. It takes no longer for a fight to turn into physical abuse.

A relationship where things reach a level of physical abuse is worth reconsidering. You can’t hit someone, regardless of the gender. It’s against humanity. If you are of those types who can’t control their anger so please just move out.

Try to control your words. Don’t say anything about which you would have to regret in future.

We live in a world where people use abusive words when they feel they are losing the argument. They want to insult them when they are left with nothing.

Stay away from such gestures and words.

It’s better to take a break rather than arguing on that silly topic. This would give time to both of you to think and recapitulate all the points.

People do things and say things in anger which they don’t mean in reality. So to avoid future guilt, avoid a conversation and take a little break of 5-10 mins.

After a break. You feel more relaxed, freshened and can think wisely. You and your partner both would realise no need for such a steamy argument.

Now as a realization game plays its part, the best way to solve any problem is sit and talk with all your senses and listen to each other without interrupting.

TALK and solve the matter, as this is the one and only best way. 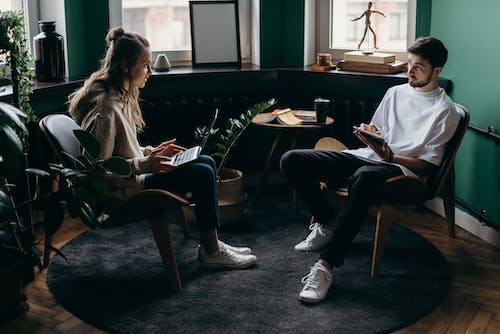 1. How to propose a girl on whatsapp ?

2. Importance of self worth in a relationship

4. What to do when girl blocks you on whatsapp

Types of Boyfriend ! Which one is you?

Essential Budgeting Tips for Budgeting With Your Spouse

Dating Red Flags You Should Look Out For

How to convince parents for love marriage ?

Shilpa Choudhary - July 22, 2020 0
How easy it is to fall in love with someone but why is it so difficult to convince parents for love marriage? When you love someone, you love them with heart without any barrier of...
Read more

How to get over someone you love so much?

Shilpa Choudhary - April 14, 2020 0
Did you just have a heart break? Don't know how to get over someone you love? You gave everything to that person but all of your efforts just went into vain. Loving someone with...
Read more
Advertisement